In case anyone reading this blog is wondering why I am writing about the Piccadilly Arcade for the third time (see Part I and Part II )  I should perhaps explain that my office window looks out over the Arcade’s entrance on to New Street so I am probably more familiar with this building than with any other in Birmingham’s City Centre. According to my trusty Pevsner Architectural Guide to Birmingham, the facade of the Piccadilly Arcade is constructed from a material called faience which, the Pevsner Glossary reliably informs me, is moulded terracotta that is covered with a white or coloured glaze. In the case of the Piccadilly Arcade, that glaze is predominantly cream, interwoven with green highlights to create a geometric pattern. Faience was a popular material at the turn of the start of the 20th century, which was when the Piccadilly Arcade was built, because it resisted the grub and grime caused by pollution. But today, I am thinking less about the material from which the Piccadilly Arcade is constructed and more about its style.

As I survey the facade, I can spot some features that I recognise as belonging to Renaissance classical architecture. Rising above the two curved glass shop fronts which flank the entrance, there are a number of long rectangular windows, each comprising a grid of small glazed panes, two of which are crowned with triangular pediments. And, craning my head back still further to view the uppermost level, I can see a sort of open corridor lined with a series of columns that Pevsner describes as being an open arcade. It reminds me a bit of the loggia at Hardwick Hall in Derbyshire. Built in the 1590s by Bess of Hardwick, a contemporary of Queen Elizabeth I, Hardwick Hall is an example of a building which, like its Italian Renaissance cousins, sought to revive some of the architectural features first believed to have been used in classical Greek and Roman buildings.

Yet although the architecture of the Piccadilly Arcade does include some classical elements, I can’t quite shoehorn it into that category. For a start there’s the central huge arched window, which spans two windowed levels of the facade. And then there’s the pair of turret-type structures, enthroned like a King and Queen on each side of the building. Pevsner describes them as being ‘Wren-style’ and when I examine a photograph of St Paul’s, which was built by Sir Christopher Wren in the 17th century, I can see exactly what he means. 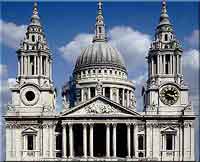 The arch and these turrets on the Piccadilly Arcade combine to give the facade  (and I hope this doesn’t sound too pretentious), what I can only describe as being a sort of architectural exuberance which is at odds with the restraint and discipline that typifies its classical relations. I use the word ‘relations’ very deliberately because Pevsner informs me that the style of the Piccadilly Arcade is in fact Baroque and I know that Baroque evolved from out of the Italian Renaissance. The style of buildings in ancient Rome and Greece, which was revived in Renaissance Italy, was very rule bound and the want to ensure perfect proportion resulted in what I think is referred to as the grammar of architecture.  My understanding of that phrase is that just as language is governed by rules which dictate the order in which verbs and nouns and adverbs are arranged to create a sentence, so too there are strict rules in classical architecture which set out the way in which different elements can be combined. Baroque architecture broke these rules and in so doing created buildings that were dramatic and awe inspiring. When I think about the Baroque, I have a picture in my mind of a rebellious teenager intent on breaking the all rules in an effort to assert his or her sense of identity.

In some respects, that want to challenge is exactly what the Baroque movement was all about. By replacing ‘angry teenager’ with ‘angry church’, I sense that I’m edging a little further forward in expanding my understanding of the origins of the Baroque. It has its roots in 16th century Italy when the Catholic Church was reeling from the scathing attack made upon it by the German friar, Martin Luther, who had accused it of endemic corruption and was demanding radical reform. The Catholic Church was having none of it and mounted its defence with what modern eyes might regard as being a massive PR exercise. In the absence of mass media, it was art, sculpture and architecture, rather than television, newspapers and social media that acted as vehicles by which to proclaim the power and authority of the Catholic Church. Whilst those who took their lead from Martin Luther worshipped in simple unadorned buildings designed to encourage sombre reflection, the Catholic Church sought to stir the soul and secure support by commissioning huge buildings where size, style and decoration combined to create a real ‘wow’ factor and convince the viewer that Catholicism sat triumphant and unshakable on the throne of spiritual and political authority. In the words of Waldemar Januszczak, who recently presented a wonderful programme called Baroque: from St Peter’s to St Paul’s, the Baroque was ‘a marvelous display of counter-punching by a waspish church’.

But what, I hear you say, has any of this got to do with the Piccadilly Arcade – a building designed in 1910 by Nicol and Nicol to house a cinema? I must admit that, not being a student of architecture, I’m struggling to answer that question because the Piccadilly Arcade certainly doesn’t have anything to do with promoting Catholicism. So I’m scratching my head and wondering why the architects chose this style. Thinking that perhaps my understanding of Baroque has been too narrow, I turn to Pevsner once again but find myself even more confused. Because although in one part of the book the Piccadilly Arcade is described as having a Baroque facade, in another section there’s mention of the Arts and Crafts influence and Neo-Georgian language, as well as classical design and Wren. I was about to give up and delete this entire blog when a thought occurred to me. Perhaps as the Baroque evolved over time, it had less to do with a specific agenda or prescriptive set of architectural features and more to do with a spirit of freedom: freedom to combine motifs, some classical and some drawn from elsewhere, in all sorts of inventive ways to create bold facades just like that found on Piccadilly Arcade. So rather than delete all of this, I’m going to tap the ‘publish’ button and send this entry out into the blogosphere in the hope that it will make sense to someone . . .